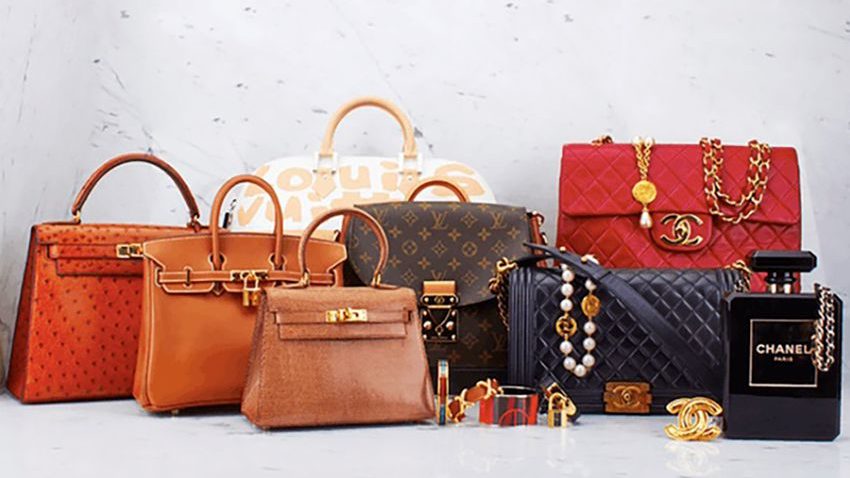 Designer handbags…it seems to me that this is a trend that is one of the most classic of all and one that isn’t going to go away. Usually a major investment, think the Birkin or Kelly bags for examples but if you think of how many years you will treasure your purchase it makes good sense. Here is a category that totally exemplifies “buy the best you can” and if you are lucky you can find that perfect vintage designer handbag at the monthly Randolph Street Market. Be sure you buy authentic pieces, talk with the dealers, train your eye, do your research and remember any vintage fashion is the perfect answer to sustainability!

I asked my friend, Stephanie Lake, to share some insight into Bonnie Cashin’s unique vision on handbags and here are her comments and photos. A million thanks, Stephanie, for sharing your detailed information and wonderful photos. A nenasnotes….I had the “Cashin-Carry” bag selected for me by none other than the Uber talented Bonnie Cashin…herself, lucky me!

All images courtesy the Bonnie Cashin Archive, photographed by Charles Lee for Bonnie Cashin: Chic is Where You Find It.

“Bonnie’s foray in the handbag market forever changed the accessories industry. The tally of her fashion firsts in this category alone is jaw-dropping, and her impact in never-ending.

Her first handbag, referred to as a “Cashin-Carry,” was a soft leather sling bag available in a rainbow of leather and textile options, and introduced in 1955. It was her opening salvo to disrupting the accepted notion that women’s handbags were to be dainty, fussy, rigid and neutral. 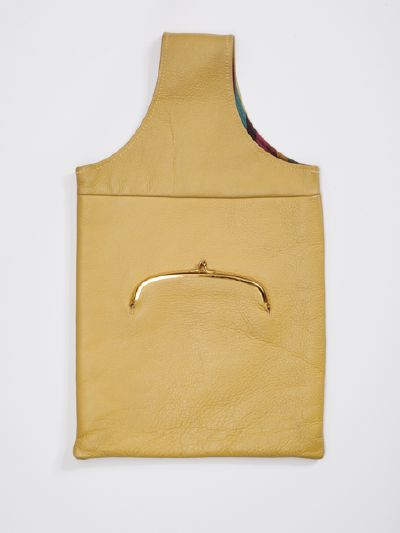 Bonnie further revolutionized the accessory industry when she introduced what Women’s Wear Daily referred to in 1962 as fashion’s “first snob tote,” ushering in the very new concept of the “it-bag.” These signature shopping bag totes were offered in three sizes, meant to be nestled one inside another, or worn “à trois” along the arm, equipping modern women on the go with the range of handbags needed for diverse activities throughout the day, outside of the home.

Her concept of carrying more than one bag is the point of origin for today’s commuter bag. Her belt-bags, too, introduced in the 1960s, unleashed generations of iterations on the concept, variously beloved or reviled as today’s “fanny packs” and “bum bags.” 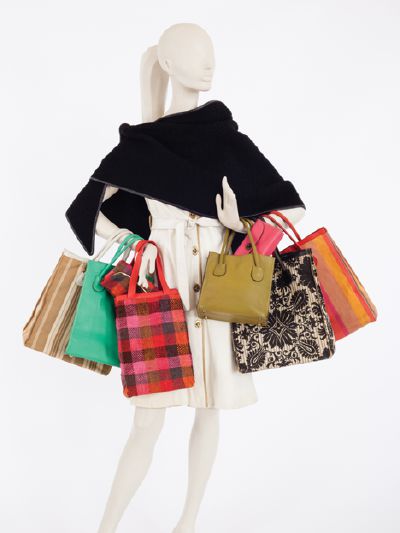 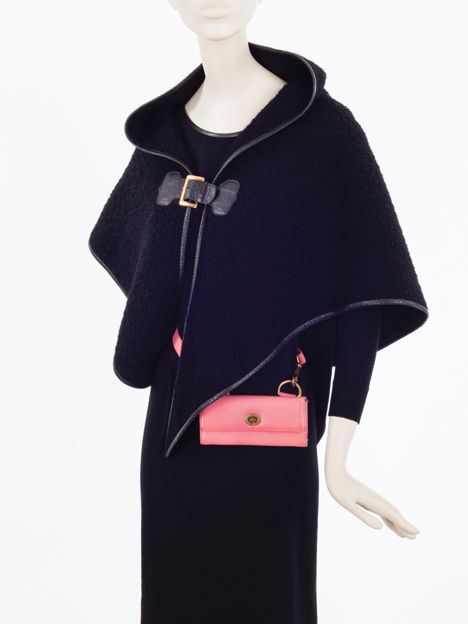 Bonnie was the first to design handbags together with all of the coordinating accessories that a woman may need. “No one has attempted this before,” she remarked of the idea that wallets, coin purses, notebooks, eyeglass cases—and even flasks—should accompany each handbag design. The concept was so novel that retailers had to reconfigure their handbag departments to display her entire line together. Moreover, each accessory was designed as an adjunct to her clothing designs, thereby providing her clients a total “Cashin look” decades before fashion licensing would allow for this approach to become mainstream. 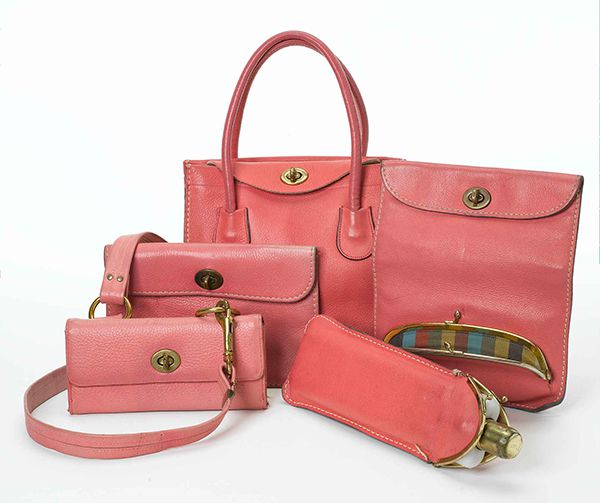 Perhaps most staggering is Cashin’s introduction of the term and the concept of using “hardware,” in utilizing industrial closures for all categories of high fashion. The closures on her garment and accessory designs were adapted from industrial sources, meant to withstand wear, tear, and stress points, open with ease, and unfailingly provide the greatest security.

Her bold brass zippers were the same as those used in tents. Her hook and eye closures were adapted from equestrian tack and dog leashes. Most famously, her brass turn lock, which she used on all clothing and accessory designs from 1964 unto her retirement in 1985, was inspired by the hardware used to batten down the top of the convertible sports car that she drove through the Hollywood Hills each day as she commuted to work at Twentieth Century-Fox in the 1940s. Her single, brilliant, iconoclastic idea grew to become the fashion world’s most iconic closure, omnipresent and in constant use by untold brands and designers, including Coach, where she became their first-ever handbag designer in 1962.” 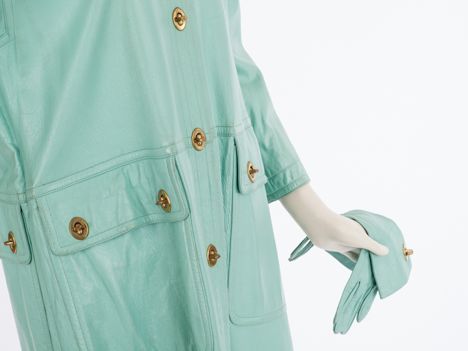 The original quilted Chanel handbag was created in 1929, it was fashioned after soldier’s packs. In February 1955, the so called 2.55, the shoulder-carried bag debuted and totally changed handbag history. Coveted to this day, it comes in all colors, many skins and it is always on display in the Chanel seasonal presentations.  The “pocket” in the outside back of the bag is to hold money.  Always one of the top sellers in the Chanel boutiques and to be found at auction and, of course at RSM. Again be sure you are purchasing the authentic bag.  I have the good fortune to have both a black calfskin and a brown calfskin version in my wardrobe, plus a small black satin version, my go to for special occasions…they are treasures to me. 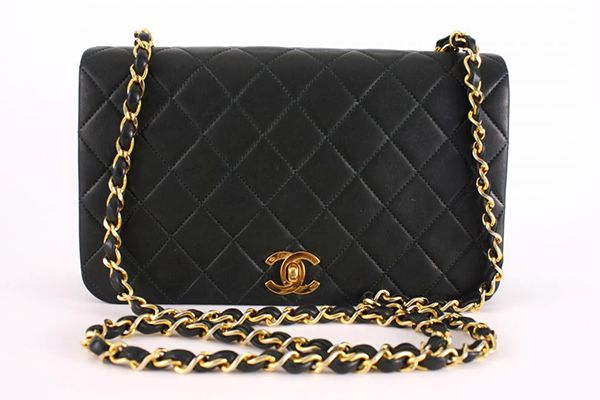 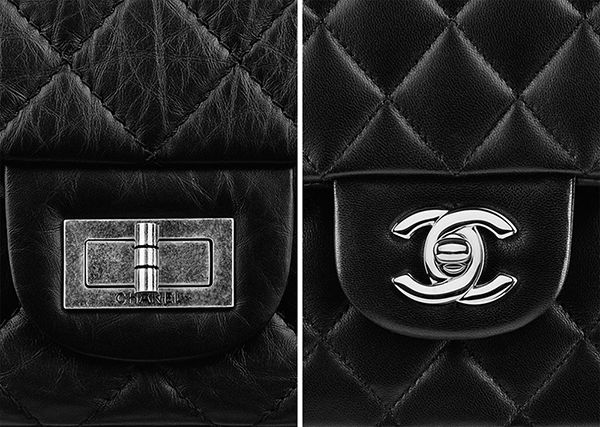 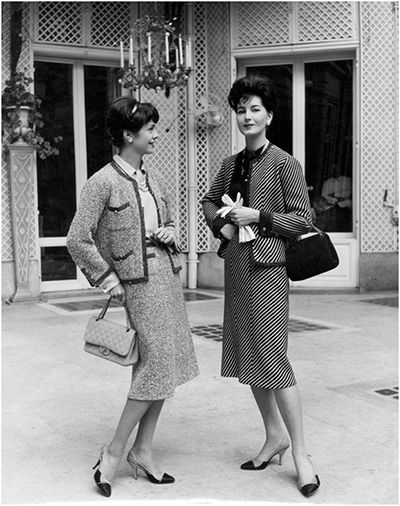 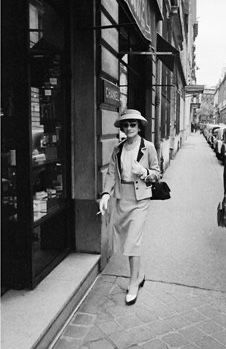 Two of the most iconic and certainly the most collectible come to us from Hermès, the Birkin and the Kelly bags….let’s take a brief look into their beginnings and the two women who inspired their creations.

“In 1984, the English actress, Jane Birkin and Hermès, Jean-Louis Dumas meet ten thousand feet above the ground. The young mother laments that she cannot find a shopping bag big enough to carry her daughter Lou’s bottles. No sooner said than done, the empathetic, clever Monsieur Dumas designs a deep and supple holdall. It has distinguishing features such as a polished plaque, a swivel clasp, and, of course, the house’s signature saddle stitching. A legend is born.” From the Hermès website. 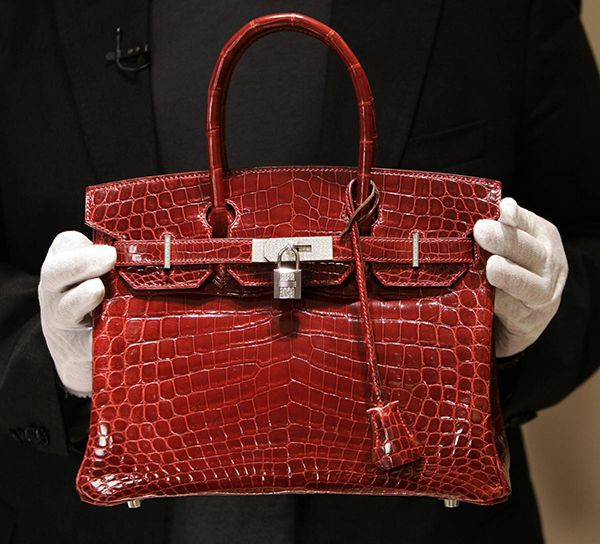 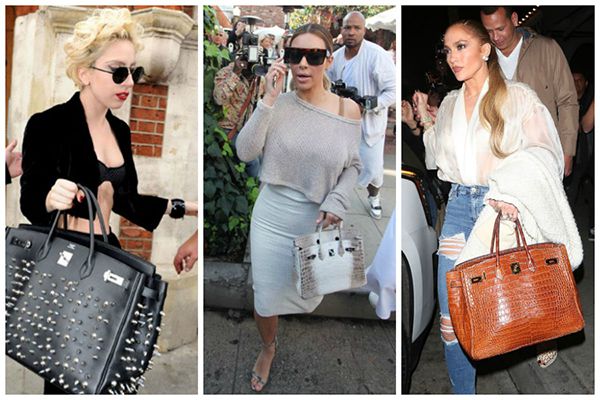 Celebrities with their Birkin bags

The Kelly bag, formerly known as Sac à dépêches when it was first designed in 1923, was chosen by Alfred Hitchcock in to be carried by Grace Kelly in the film To Catch A Thief 1955, with the wardrobe designed by Edith Head and filmed in Monaco where Kelly meet her future Prince. It became widely known when Kelly carried it to conceal her pregnancy. 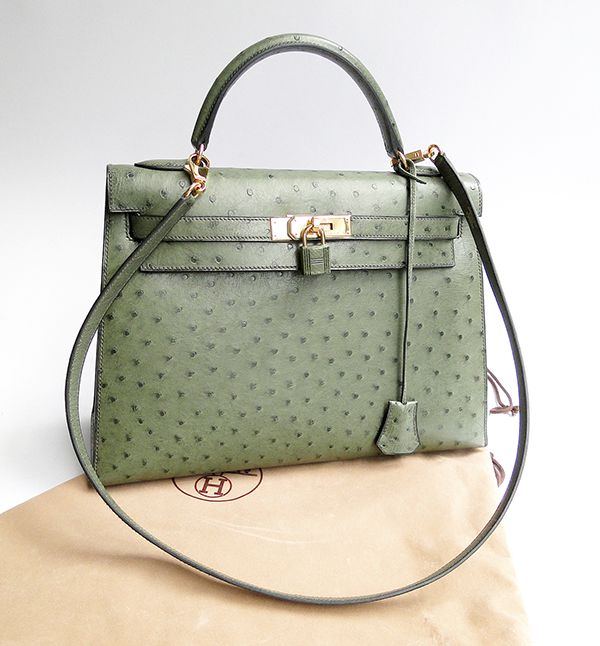 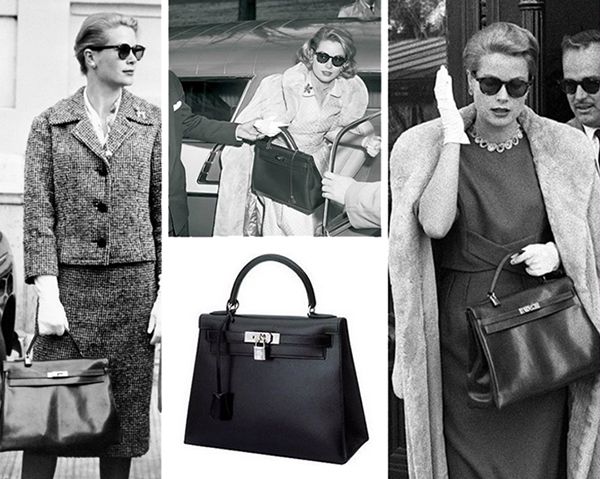 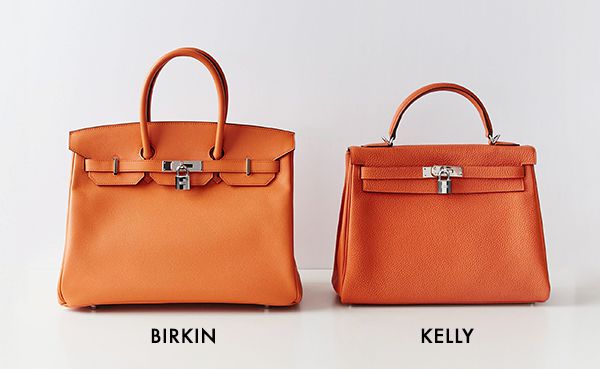 Perhaps one of the most iconic and recognizable of all logos….the company was formed in 1854 and made luggage, beginning with stackable trunks, for royalty and the elite. 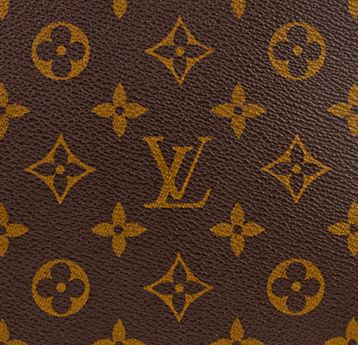 1930, the Keepall bag was introduced. 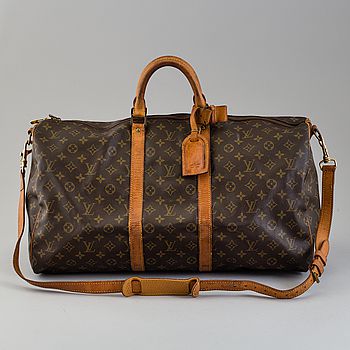 1930s, the Alma bag was created by Gaston-Louis Vuitton. It is believed that it was originally made for Coco Chanel as a custom order. Originally, the bag was named ‘Champs of Elysees’ after the famous road in Paris. The original Alma was the creation of Gaston-Louis Vuitton, who named it for the Alma Bridge, a span that connects two Parisian neighborhoods. 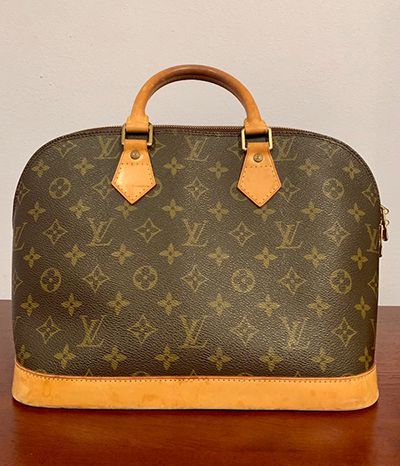 1932, LV introduced the Noé bag when a champagne house contacted LV to make a bag that would hold 6 bottles of champagne. The bag still serves this function – 4 bottles with the bottom down and the 5th inverted and nestled between the others. This drawstring bag comes in two sizes – the Noe, and the smaller Petit Noe. The name Noe is French for Noah, who was not only famous for loading animals on the Arc two by two, but for his ability to consume wine. 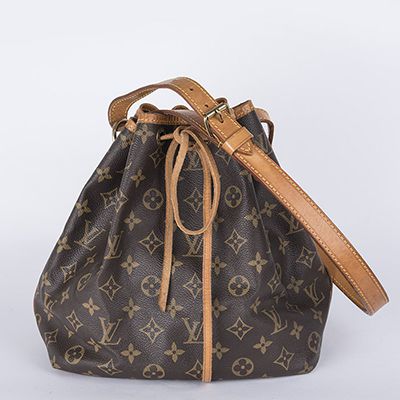 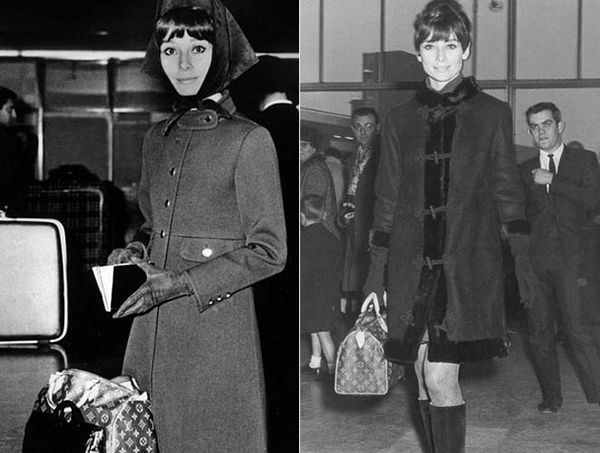 1965, film star Audrey Hepburn made a special request to Louis Vuitton to make a mini version of their Keepall duffle just for her. Louis Vuitton obliged Audrey’s request and created what is now known by fashionista’s and handbag lovers as the “Speedy 25”. Now created in 25, 30, 35, and 40, as well as a Bandouliere style that includes a strap.” Taken from a timeline of Vuitton bags on YOOGI’S CLOSET website an excellent reference. 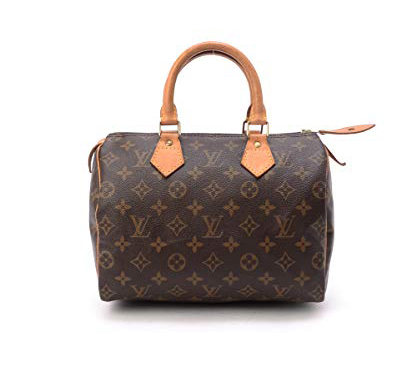 A nenasnote……I have two versions of what I call the roll bag, actually the Papillon bag…and one is a signed piece….shall I share a naughty Nena story, okay, I will. Full disclosure……Many, many years ago I was attending a Chicago Bears game (I’m a life long fan!) with some friends. I was stopped by the usher (before we had the security we have now) and he asked “ Do you have beer in that bag?” My response was “Do I look like I have beer in my bag??!! He said no and in we went….the end of this story, six cans of beer fit perfectly…need I say more!!!! 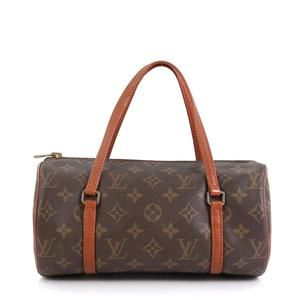 “In 1997, Marc Jacobs became the company’s artistic director, introduced first RTW line and introduced the Vernis collection. Marc Jacobs brought a much needed youthful spirit to LV and spurred collaborations with famous artists: In 2001, Stephen Sprouse created the Graffiti and Roses lines; in 2003, Takashi Murakami created the Monogram Multicolore and Cherry Blossom lines; in 2008, artist Richard Prince created the Aquarelle, or more commonly known as the Watercolor Speedy. A reinterpretation of the iconic bag, this style features the classic Monogram pattern with a smudged painted fashion. There are 17 paint colors that are used in the smudging of this Speedy. These were released in white and brown. In 2012, Yayoi Kusama created “Infinitely Kusama” collection. Additionally, Marc Jacobs also introduced LV to collaborating with numerous street artists.” From YOOGI’S CLOSET website

Vuitton features limited editions each year….here are some from the Marc Jacobs collaborations. 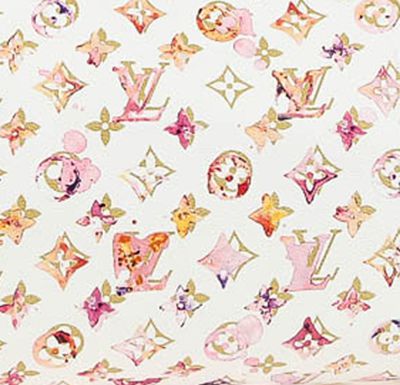 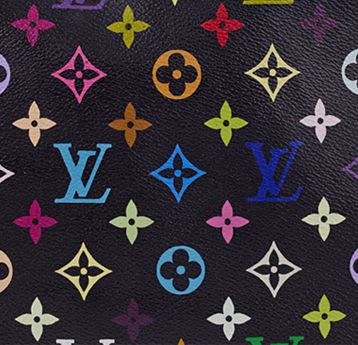 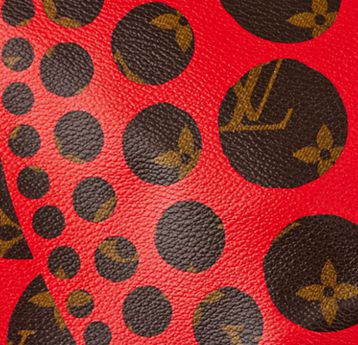 What to do with your Louis Vuitton bag collection…..just a thought!!!!! 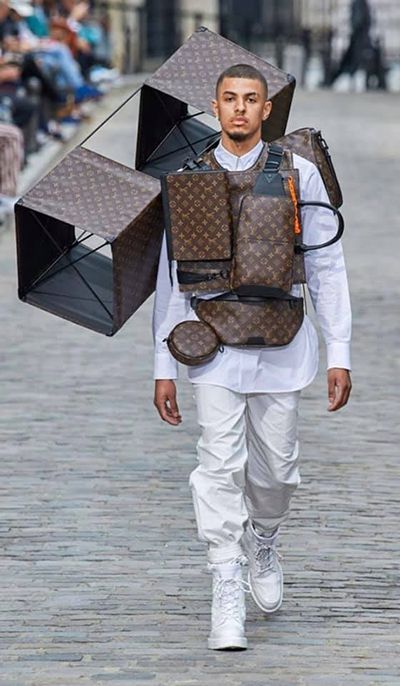 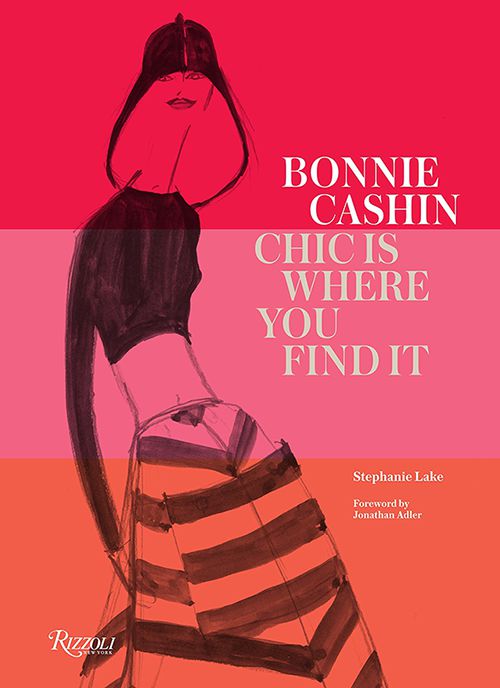 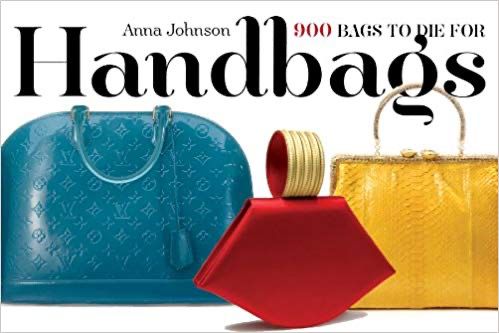 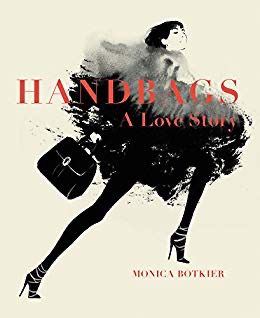 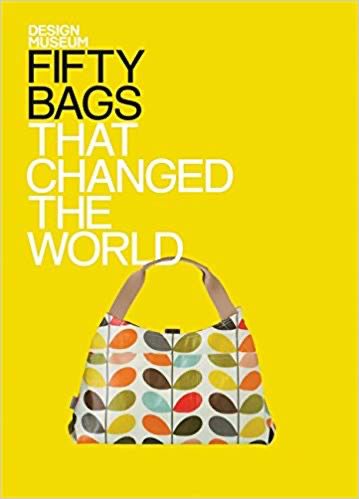 Watch for a second post on Designer Handbags on a future RSM Blog.

With the exception of the Bonnie Cashin images, all photos found on Pinterest no photo credits available.